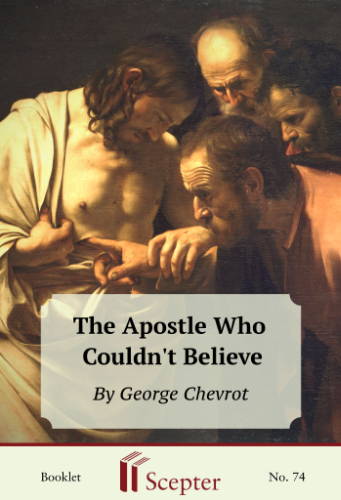 The Apostle Who Couldn't Believe

The behavior of the ten apostles on the day after the resurrection can easily be imagined. Joyfully they told the brethren whom they met in the city, and who kept cautiously in the background, the now certain news of the resurrection. Yet their declaration did not receive unanimous acceptance; the gospels of Sts. Mark and Matthew both show evidence of disbelief. But the ten would not reproach anyone for disbelieving; had they not themselves on the previous evening rejected the very idea of any such miracle, and had the Savior himself not experienced enough difficulty in removing their remaining doubts? Instead, they merely tried to convince the others. There happened to be one among these others, Thomas, whose Greek name is Didymus, one whose prestige bolstered the position of those who were similarly skeptical. Though the ten vainly repeated to him, “We have seen the Lord,” he stood fast in his resistance: “Until I have seen the mark of the nails on his hands, until I have put my finger into the mark of the nails, and put my hand into his side, you will never make me believe.”