Theologians in later times often referred to Joseph as “the Angelic Man.” They did this for two reasons. First of all, and obviously, because he had at least four vivid encounters with angels in his lifetime. That is four more, perhaps, than most people have. But there is another reason why he was “angelic.” He was angelic, the theologians say, because he received in abundance the particular gifts of all the pure spirits in heaven.

This argument is developed most fully in the work of Jerónimo Gracián, a sixteenth-century Carmelite friar, best known as the spiritual director of St. Teresa of Avila.36

Gracián follows the Christian interpretive tradition, which identifies in the Bible nine distinct orders (or choirs) of pure spirits in heaven. There are angels, archangels, and principalities; virtues, powers, and dominions; and thrones, cherubim, and seraphim. Each grouping has its particular way of serving God—a particular, “angelic” way. And yet, Gracián says, Joseph managed to fulfill the requirements of each and every group.

An angel, in the biblical languages, is simply a “messenger.” That is the literal meaning of the Hebrew malakh and Greek angelos. Even as they delivered messages, however, the angels commonly served also as guardians and guides (see, for example, Gn 16:7–13 and Zec 1:8–21). Like the angels, Joseph served as a messenger between heaven and the Holy Family, and then served as the family’s guide and protector.

An archangel is a ruling angel. To archangels, in the Scriptures, God assigns the tasks of greatest gravity. The only spirit identified in the Bible as an archangel is Michael, who consistently opposes the devil in direct combat (see Jude 9, Rv 12:7). In the interpretive tradition, Gabriel (Lk 1:26) and Raphael (Tb 12:15) are also identified as archangels. St. Paul reveals that an archangel will announce the resurrection of the dead at the end of time (1 Thes 4:16). Like these ruling angels, Joseph was given a task of utmost gravity; his combat required direct engagement with evil; and he bore messages to Jesus and Mary.

The principalities are God’s ordinary and immediate servants in the concerns of the visible world. Some scholars identify them with the guardian spirits of nations (see Sir 17:17). St. Paul mentions the principalities often (see Rom 8:38, Eph 3:10; Colossians 1:16); he speaks of some of them among the malicious spirits (see Eph 6:12; Col 2:15). According to the later Church Fathers, the principalities have a special concern for the leaders of nations and leaders in religion.37 After the manner of the principalities, Joseph was given authority over the household of the Holy Family—and special care for the King of Kings. 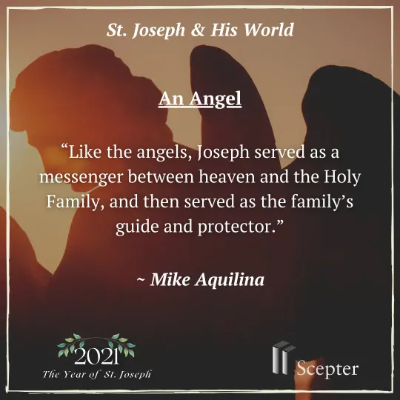 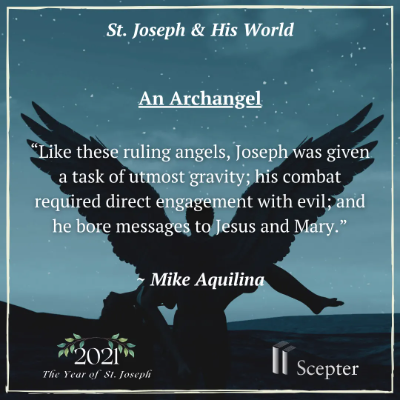 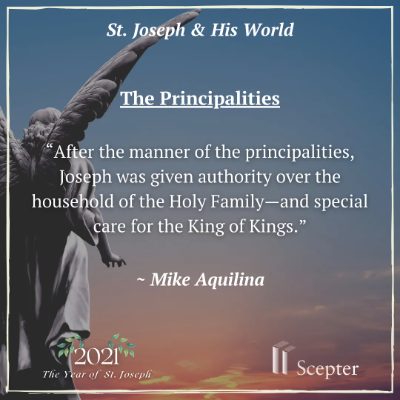 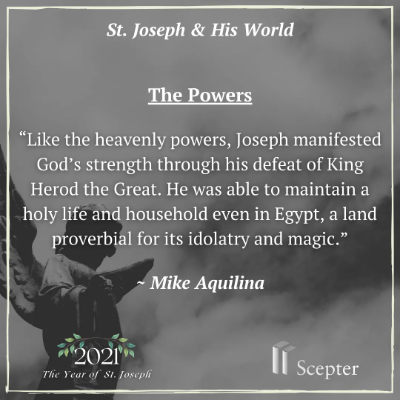 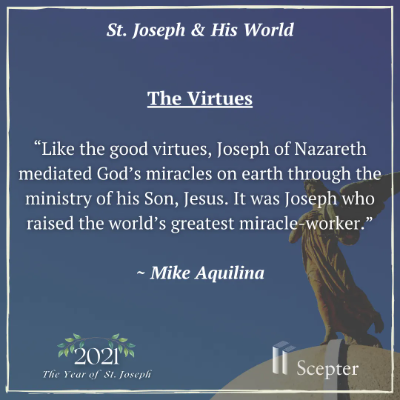 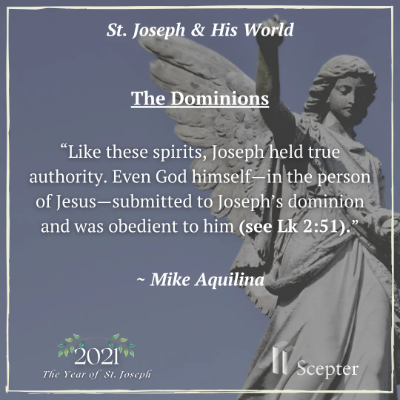 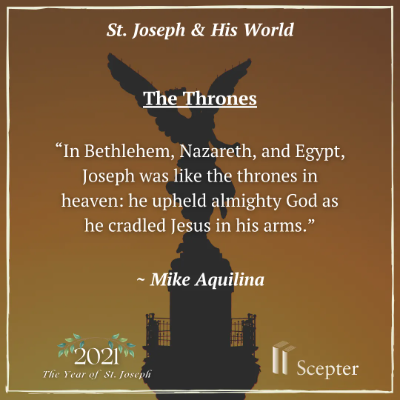 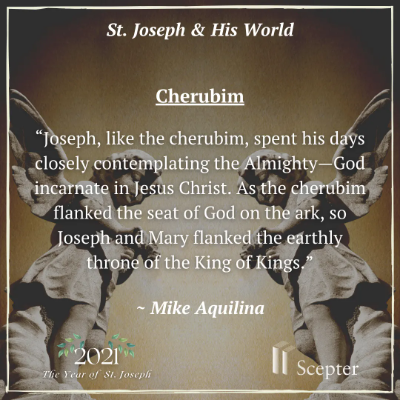 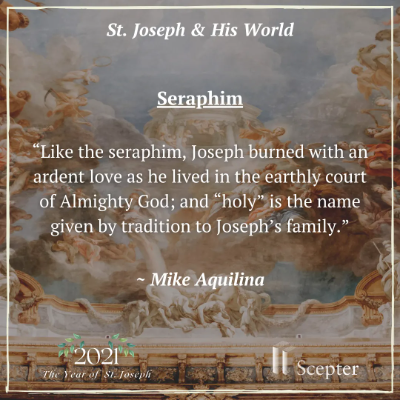 The powers are those spirits specially commissioned to restrain evil spirits and punish them. St. Paul usually speaks of them together with the principalities (see above) and in the same way. Like the heavenly powers, Joseph manifested God’s strength through his defeat of King Herod the Great. He was able to maintain a holy life and household even in Egypt, a land proverbial for its idolatry and magic.

The virtues are the spirits through whom God performs astonishing works and great miracles—for example, Joshua’s stilling of the sun and moon (Jos 10:12–13). According to tradition, Satan was created in this order, and since his fall he depends upon empty spectacle—a parody of the miracles for which he was created. Like the good virtues, Joseph of Nazareth mediated God’s miracles on earth through the ministry of his Son, Jesus. It was Joseph who raised the world’s greatest miracle-worker.

The dominions (sometimes rendered “dominations”) are assigned to the regulation of other pure spirits. St. Paul mentions them in Colossians 1:16. By their ordinary service they demonstrate the necessity of hierarchy in every social order, even in heaven. Like these spirits, Joseph held true authority. Even God himself—in the person of Jesus—submitted to Joseph’s dominion and was obedient to him (see Lk 2:51).

The thrones in heaven represent the agents of God’s rule, justice, and judgment. They are alive, and the prophet Daniel represents them as fire (Dn 7:9), and Ezekiel as a sapphire that is brilliant and clear (Ez 10:1). In Bethlehem, Nazareth, and Egypt, Joseph was like the thrones in heaven: he upheld almighty God as he cradled Jesus in his arms.

The cherubim appear often in the Bible, and they are usually associated with close proximity to God. When God expelled Adam and Eve from the Garden of Eden, he placed cherubim as guards, with flaming swords, in order to keep the primal couple away. After the Exodus, God commanded the Israelites to place golden images of the cherubim on the ark of the covenant (Ex 25:18–22). He ordered them also to embroider cherubim into the curtains and veils of the tabernacle (Ex 26:1, 31). For the inner sanctuary of the Jerusalem temple (the Holy of Holies), Solomon fashioned two gigantic cherubim out of olive wood—each one fifteen feet tall and plated with gold (1 Kgs 6:23–25). Joseph, like the cherubim, spent his days closely contemplating the Almighty—God incarnate in Jesus Christ. As the cherubim flanked the seat of God on the ark, so Joseph and Mary flanked the earthly throne of the King of Kings.

The seraphim are the highest attendants in the court of God. Their name in Hebrew means “fiery ones,” and it describes their great love. They appear only once in Scripture, in the prophet Isaiah’s vision of heaven’s throne (Is 6:2–6); but they are mentioned also in apocryphal literature that was popular in Joseph’s lifetime.38 It is the seraphim who perpetually sing the hymn “Holy, Holy, Holy” to God in heaven (Is 6:3; Rv 4:8). Like the seraphim, Joseph burned with an ardent love as he lived in the earthly court of Almighty God; and “holy” is the name given by tradition to Joseph’s family.

By comparing Joseph to each of the ranks of pure spirits, Jerónimo Gracián justifies the title “Angelic Man” for Joseph of Nazareth. Joseph surpassed all the orders of heaven in his excellence. He was nearer to God and served him more closely and constantly than even the angels. For this reason, Joseph received such close attention from the angels. In heaven he was already seen as a prince.

Gracián’s analysis has implications not only for Joseph’s life, but also for the lives of Christians in every generation. Through baptism, all believers have been given a place in the divine household and have been called to share a table with Mary and Joseph and Jesus.

Like Joseph, all Christians are now able to serve Jesus in close proximity—as close as the angels—and as constantly as Joseph served him. Work need not be an interruption of love, and in most cases it is not. For dedicated parents, work is often an expression of love. In Joseph’s work he loved his wife and son, even when his work took him away from home, even when his work required his most intense concentration, and even when he was working in Egypt’s blistering summer heat.

Like Joseph, all Christians can be “angelic” as they bear Jesus sacramentally and carry his presence out into the world—a world that still has its Herods, hostile to the Lord.