A Sneak Peek at the Douglings Adventures Book 2 "The Lair of Illusion".

The fragrant breeze was a warm welcome for the children. Serena spread out her arms and spun around gracefully. Joachim discovered a small, speckled frog and was insistent he could speak the language. He held the small creature up to his ear. “What’s that, my little friend?” he said sweetly. “Oh, I see.”

“This guy wants to go to the river,” he said, holding his energetic companion captive in his cupped hands. The frog’s tiny feet gently but frantically scraped the inside of Joachim’s palms. “Hey! That tickles!” he giggled. “I think I should name you Wriggle McSquiggles.”

“You can’t keep him,” Allora asserted.

“I know,” Joa sighed, “but I do want to find him the perfect home.”

“Well,” Will said. “Do you think Wriggle McSquiggles would like to start his house-hunting at the waterfalls?”

“Oooh, I second that!” Mary added. “I didn’t get to have a good look at them yet. Can people swim through the falls?”

“Yes,” Will answered. “They’re pretty gentle. You can easily swim under them and, for anyone who’s brave enough, it’s also possible to jump down from the top. The falls are only about ten feet high and the water beneath is pretty deep.”

“I can’t wait to do that!” Mary replied.

“Do you want to see something really cool?”

The children all nodded and followed Will down the stone path leading to the river. The light mist of the waterfalls moistened the air, mingling with the sweet aroma of the azaleas. Within minutes the group witnessed one of the most beautiful sights: the cascading falls pouring gently into a turquoise lagoon. They were surrounded by giant boulders layering and projecting out over the water. The children stood motionless, held in a thrilling silence.

Joachim bent down and released Wriggle McSquiggles, who hopped happily into the water with a muted splash. “Goodbye, my friend,” he whispered sadly. “I’ll never forget you.”

“Over here,” Will motioned to the group. He led them around a large boulder and along the lip of the water’s edge. The wall behind the falls looked like giant slabs of rock, layered tightly, with deep erosions.

“There’s a hidden cave that curves behind the falls,” he said in a suspenseful tone. “Is anyone interested in checking it out?”

His suggestion was met with unanimous approval.

He approached the wall and slid his hand between a sheet of green, weepy foliage dangling down from the crest of the falls. As he parted the delicate, leafy drape, the small entrance to a cave was revealed.

“Whoa!” Angelica cried. “Does anyone else know about this cave?”

“I’m not sure,” he answered. “I’d be surprised if anyone spent much time exploring here because of that.” He gestured toward a patch of wild grass and greenery that sat to one side of the entrance.”

He raised his eyebrows. “You’ll have to be careful not to get too close to it. You wouldn’t want to deal with a rash on your woddler.” He chuckled and Angelica snorted.

He lowered his head and crouched down as he crept into the mouth of the cave.

“I’m a little claustrophobic,” Allora called out, hesitantly. “Tell me it gets bigger in there.”

“It does!” Will’s muffled voice called back. “Much bigger!”

“Okay,” she said with a determined voice. “Then I’ll go next.”

She hunched over and pushed the green veil aside, quickly working her way through the entrance. Will took her hand and pulled her up into the large cavity beyond.

“I thought it would be dark in here,” she said forcefully, trying to prevent her voice from trembling.

He smiled and, with some reluctance, released her hand.

“There are a few openings in the wall behind the falls. They’re high up, but you can see the back of the falls through them, and on sunny days it can get quite bright in here.”

The chamber was an eight-foot-high semi-domed area. It was a surprisingly large space: about twelve feet deep and fifteen feet wide.

Allora’s eyes swept over her gray-stoned surroundings, delighting in the prismatic colors dancing on the back walls: a playful effect of the light through the waterfalls. Her expression of admiration remained as she turned back to Will, who was enjoying her reaction to the secret cavern. He couldn’t help feeling proud to have been the discoverer and the one to elicit such a favorable response from his new companion.

“Wow!” Liam’s voice bellowed as he entered the cave. The two jumped at the sound of his voice.

“This is amazing! Although with several more years of erosion, the falls could collapse into this void. That would be quite the sight.”

Allora looked quickly away from Will.

Liam frowned awkwardly. “Um, I hope I’m not interrupting anything...”

Now it was Allora’s turn to frown awkwardly. “No,” she said curtly.

One by one the children entered the cave with shrills of excitement. Allora was starting to feel a bit crowded so she slowly backed away from the entrance until she bumped against the far end of the cave. She leaned back firmly, only to jump forward again at the sound of something cracking.

“Uhhhh, Liam—that erosion thing you were just talking about...” Allora said nervously, “Could that be happening now?”

“No. I don’t see any evidence of that, so I can’t imagine that would be the case.” His words were reassuring, but his eyes were wide and darting back and forth.

“There!” Serena called, pointing to the place where Allora had been leaning.

Everyone turned their attention to the wall sitting perpendicular to the falls. The area was fracturing: tiny cracks growing and splintering in sudden, sharp spurts, until the stone surface looked like a dry, desert floor. Bit by bit, pieces of shale clinked as they broke free and slid to the ground, shattering. Then, all at once, the whole section of thin rock dropped like a sheet of broken glass.

Everyone gasped as the sound echoed through the chamber like a clash of mangled cymbals.

Then—silence—save for the gentle sound of the falls still gushing outside. No one could speak at first; they just stood gaping at the wall. For the layer that had fallen away laid bare a large and somewhat familiar structure: two great metal doors. Massive and ornate, they were covered with images of great thorny vines encircling ancient-looking books. Stretching across the doors, the words EX UMBRIS ET IMAGINIBUS IN VERITATEM were gloriously inscribed.

“Liam,” Christian said, not moving his eyes from the door. “Translation.”

Liam smiled as he reverently adjusted his glasses and cleared his throat.

“Whoooaaa...” Will’s voice trailed, as he looked at each of the siblings. “What is happening here? Why do you all seem to know what this is?”

“Because we do,” Allora answered solemnly.

“A portal?” Will asked, fully confused. “A portal to where?”

“It’s a place where spiritual realities are rather tangible,” Liam stated. “The last door we came across led us to an encounter with a saint who helped us fight off a dark being trying to devastate our family.”

Will’s eyes were frozen wide, and the blood looked like it was draining from his face.

Joachim poked him. “You don’t look so good.”

“The door only opens if you have the key,” Liam continued. “Then, it’s probable that we’ll be given a particular mission—most likely something quite dangerous.”

Allora answered his question by reaching into her pocket and revealing the curious object.

Joachim was excited. “Maybe I’ll get to see my friend again!”

“Wriggle McSquiggles?” Will suggested, lightheartedly, trying to break free from the grip of interior panic.

Angelica snorted and giggled, in spite of the thick air of apprehension filling the cavern.

“Let’s do this,” Christian said, deepening his voice, sounding like a pumped-up superhero.

Allora looked slightly annoyed but handed the key to her sister.

Mary ran her fingers along the surface of the panels, which were cool and slightly moist to the touch. She drew a line down to a small hole, which was encircled by what looked like an iron crown of thorns. She turned to look one last time at the group, smiling, and warning them in a dramatic voice, “You might want to step back.”

The others obliged her.

She pushed the key into the opening and turned slowly, before sprinting back to the group and ducking in preparation.

A wave of heat drove the group back further. The doors began to glow and throb. There was a loud mix of rumbling and crackling as an intense, blue flame suddenly appeared at the top and sizzled its way down the long seam separating the two doors.

Then, all was quiet. The doors stood dull and motionless for a moment, before the two panels slowly creaked open.

Carissa Douglas lives in Georgina, Ontario with her husband, Patrick and their fourteen children. Author and illustrator of the Little Douglings series, she has a passion for creating works that help young people grow closer to Christ, discover the beauty of the Catholic Faith, and live out their lives to the fullest! 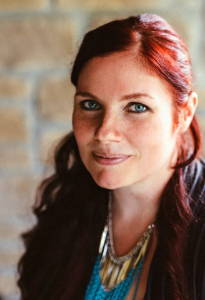 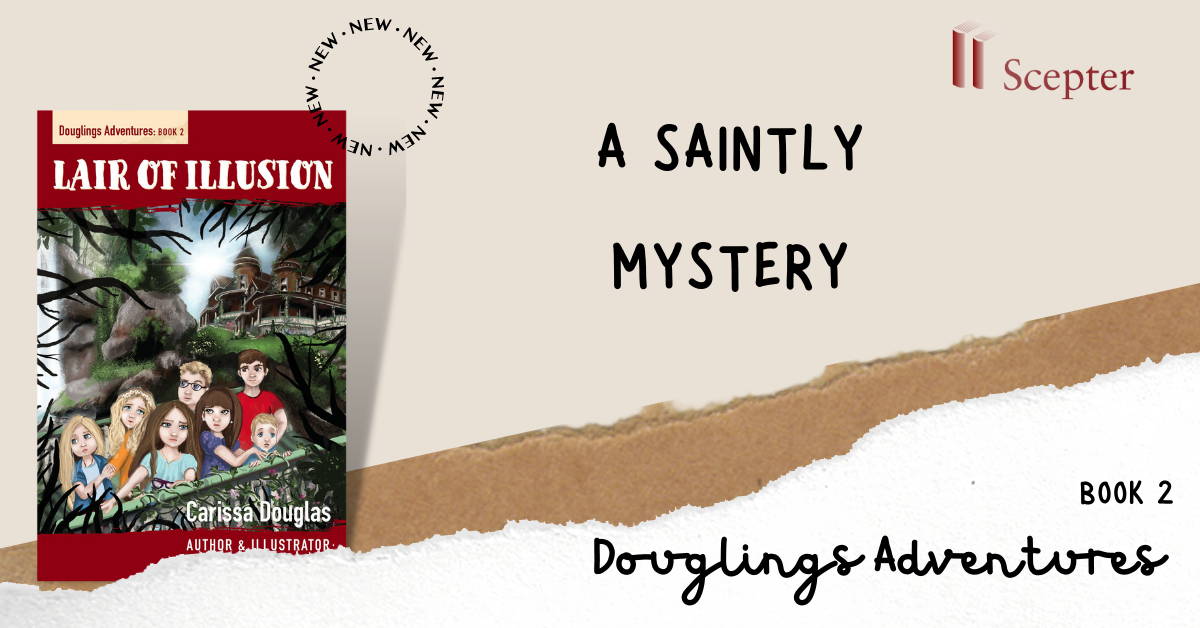