1. The Gift of Fatherhood

Let’s move on to take a positive look at things now, by attempting to remind ourselves in a few words what a gift true fatherhood can be for the person who encounters it and experiences it.

The father helps his child find his or her true identity. In the Bible, the father gives the child its name. The name is not just a label, a word to be called by, but it represents a deep identity, the mission of the person.

The father confirms the child’s identity, assuring them that they have the right to exist, the right to be whoever they are. “Thou art my beloved Son; with thee I am well pleased” (Mk 1:11). He allows the child to realize the deep truth of his or her being. Feeling welcomed and fully loved, the son or daughter perceives that they have the right to live according to their proper identity, the freedom to be themselves, to develop the skills and aptitudes possessed according to their unique vocation. I can have my own limits and frailty and sometimes make mistakes, but that doesn’t take from me the right to be who I am and to exist according to my own personality. I am not someone extra in the world, and I do not feel guilty for existing. I can heal from this feeling that is so common today, the feeling of being an extraneous thing in the world, or feeling like existence is just pure chance.

Some say that this welcoming love of the child is first the province of mothers. Of course, a mother’s role is very important. Nonetheless, I think we can dare to put it this way: it’s more natural for a mother to welcome a child, whereas for a father it’s less natural (maybe even difficult, sometimes), because for fathers it is more of a decision, a choice. The fact that it’s a choice (and not merely by operation of nature) makes it all the more important that the words of a father welcome and validate the existence and proper identity of the child, recognizing it as his own son or daughter, which is something that gives the child an identity and certain rights under civil law.

The father—importantly though not exclusively—plays a role in mediating between the child and the world, in helping the child to find security and interior freedom and to advance through life with confidence. I think that this core of interior security, necessary for any person to feel free, is made up of a double certitude: the certitude of being loved and the certitude of being able to love. The loving presence of a father helps me acquire the certitude that I am loved with an unconditional love, a love that I cannot lose, a love on which I can always count, whatever may happen. But this doesn’t suffice. To acquire the true interior security I need, I must also know that I can love. It’s not sufficient to receive love; one must also give it. In spite of my limits and imperfections, I am sure of being able to love and of being capable of a disinterested love. I am capable of learning to love, of doing good around me, of giving my life lovingly for others. I can be a gift to others. This second certainty is as necessary as the first.

The presence of a father—his attitude, his care, his words (which don’t have to be numerous)—can contribute immensely to engendering this double certitude in the child, whether a spiritual or natural one.

would like to repeat these things in another way by mentioning a beautiful tradition that is present in Scripture and in human existence, which is the blessing of a father.

I often travel to Latin America. In many of these countries, when people know that you are a priest, they approach you and ask for a blessing: “Padre! La benedición!” Sometimes there is even a long line that forms!

This blessing request exposes a cultural reality, sometimes a little exaggerated but a just one nonetheless. It is valid, first, because it’s not a man’s blessing that the people are seeking but that of God, the Father of Heaven, and second, because this request manifests an attitude of humility on one hand (I am not self-sufficient, I need the blessing and grace of God in my life), on the other hand it shows simplicity and trust. Through the limited, poor figure of the priest (there is no sacrament here!), God can give his blessing, his love, and his well-being to his people. In Europe and North America this sort of request is rare, but this may be because we have grown prideful and have little faith.

In Judaism, after the Friday evening prayer of synagogue that heralds the Sabbath, on returning to the house, the father of the family blesses each one of his children. He also honors his wife in her role through the chanting of the Eshet Hall.1 The importance of a father’s blessing is quite prominent in the Old Testament. 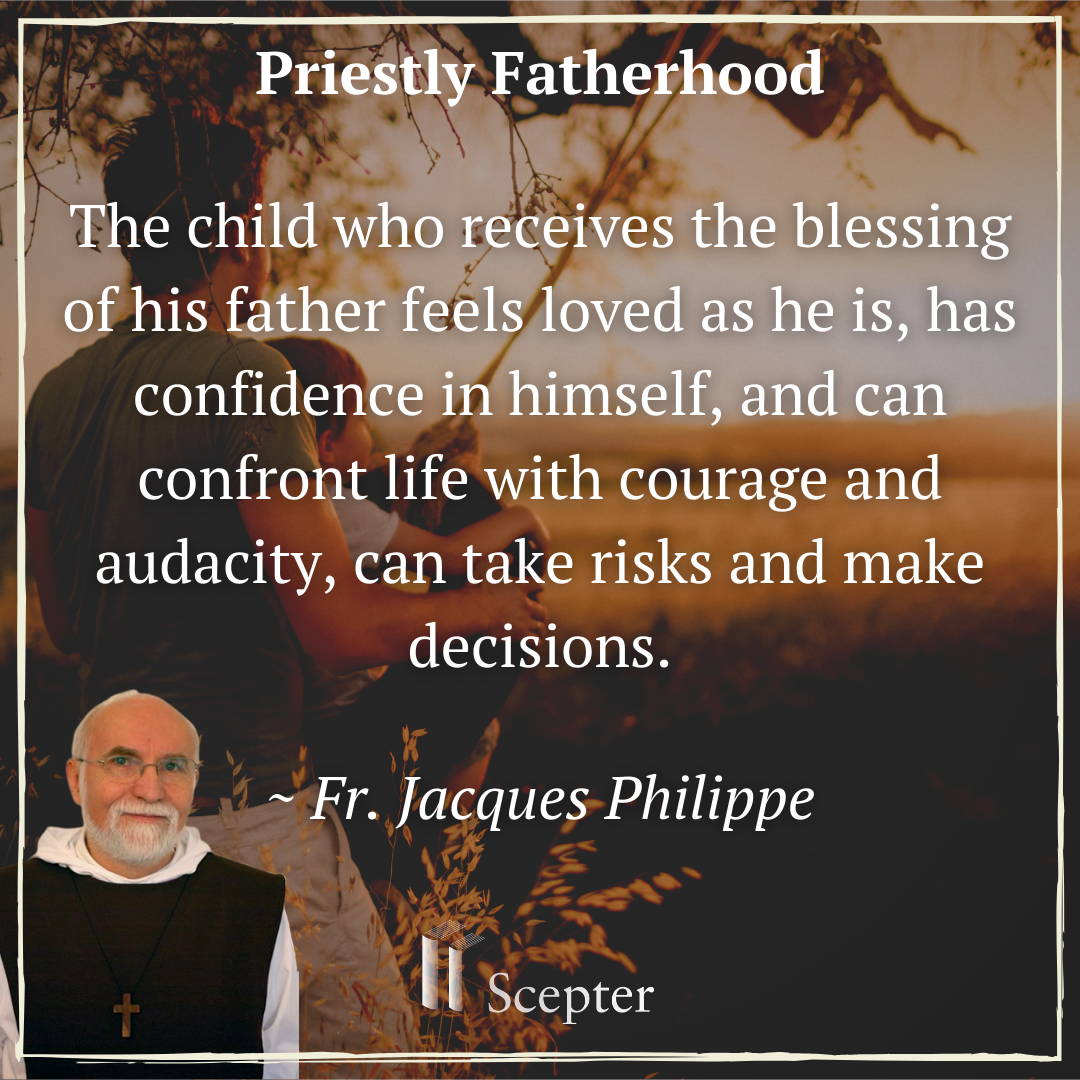 This is also a tradition in many Christian families. When I was little, every night my father would come to the bed of each of his children to embrace them and bless them with a little cross on their forehead before they fell asleep.

This fatherly blessing is of great importance. The child who receives the blessing of his father feels loved as he is, has confidence in himself, and can confront life with courage and audacity, can take risks and make decisions. Life becomes a beautiful adventure. On the contrary, if he doesn’t have his father’s blessing, he will be less sure of himself, and life becomes difficult and complicated.

There’s a passage from Scripture that is very meaningful to me in this regard. It’s a text from the prophet Malachi that’s found at a key point in Catholic Bibles, because they are the last words of the Old Testament before the New Testament begins: “Behold, I will send you Elijah the prophet before the great and terrible day of the Lord comes. And he will turn the hearts of fathers to their children and the hearts of children to their fathers, lest I come and smite the land with a curse” (Mal 4:5–6).

We know that this passage from Malachi is taken up again in the Gospel of Luke when speaking of John the Baptist’s mission (see Lk 1:16), because he is the prophet Elijah who was supposed to come. The role of John the Baptist is to prepare the way for Jesus and for the whole New Covenant, whose fundamental grace (through the mission of Jesus and the gift of the Holy Spirit) is to make us understand how completely God’s heart is turned toward us, in love and mercy, and to invite all of us to turn our hearts toward the Father with the trust and love of children. Through Jesus, God becomes our father and we his children. Remember the words of the resurrected Christ to Mary Magdalene: “Go to my brethren and say to them, ‘I am ascending to my Father and your Father, to my God and your God’” (Jn 20:17). Through the death and the resurrection of Christ, in a definitive, total way, God becomes our God and our Father.

I think that it’s very meaningful that this message addressed to the apostles, summarizing the whole work of redemption and the mystery of God’s fatherhood, is given to a woman. It’s an indication of women’s extremely important role in the salvation story by welcoming divine paternity and the restoration of human paternity.

Through the mission of the Son and the Spirit, in the mystery of the New Covenant, God reveals more deeply his fatherly love and gives everyone the power to become a child of God (see Jn 1:12).

In a beautiful passage from his Letter to the Ephesians, Paul speaks about his mission to announce “the unsearchable riches of Christ, and to make all men see what is the plan of the mystery hidden for ages in God who created all things. . . . This was according to the eternal purpose which he has realized in Christ Jesus our Lord,” a project that permits access to God in “boldness and confidence.” It’s interesting to note that in the same breath he also alludes to the mystery of earthly fatherhood: “For this reason I bow my knees before the Father, from whom every family in heaven and on earth is named” (Eph 3:8–15).

All human fatherhood finds its origins, its truth, and its finality in the fatherhood of God. The social and psychological work performed in this domain is necessary and praiseworthy, but insufficient. It’s only in returning to God that human fatherhood can regain its true meaning and be exercised in a fair and fruitful manner. 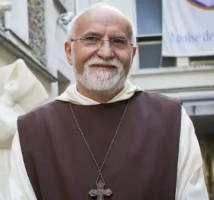 Fr. Jacques Philippe is a member of the community of the Beatitudes, founded in France in 1983. After studying in Nazareth, Jerusalem, and Rome, he was ordained a priest in 1985. He primarily devotes himself to spiritual direction and preaching retreats internationally. His published books on spirituality are the consolidated result of such work. He is the author of Fire & Light, Interior Freedom, Time for God, and The Eight Doors of the Kingdom, among others. You can find out more about Fr. Jacques and his preaching schedule at FrJacquesPhilippe.com. 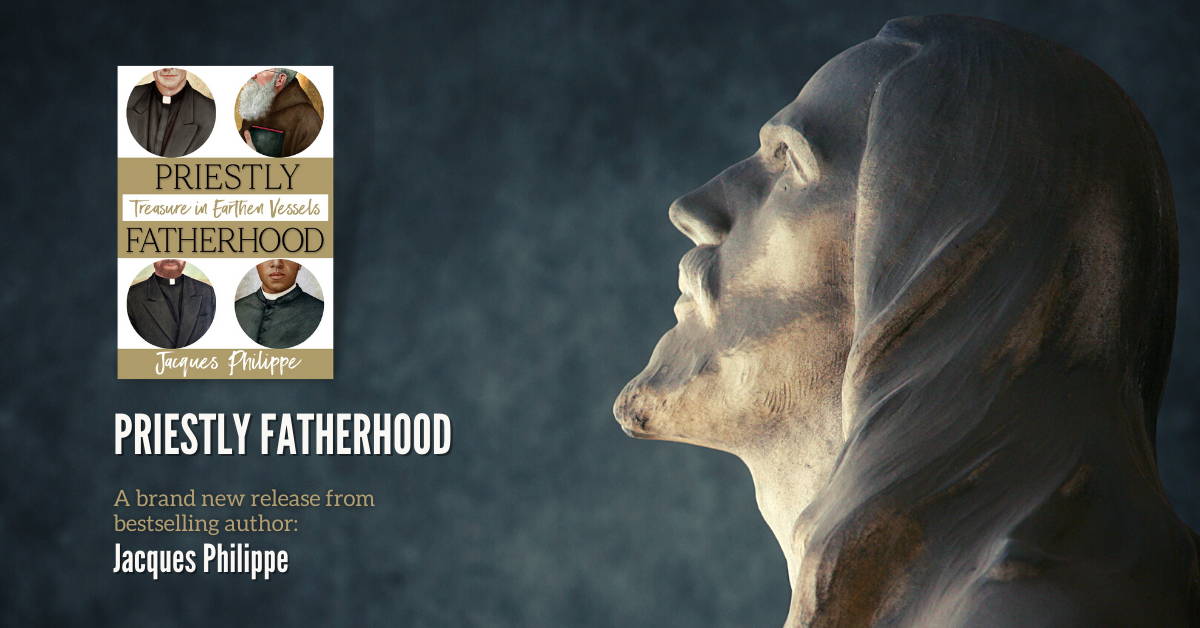