Part of Saints of Freedom 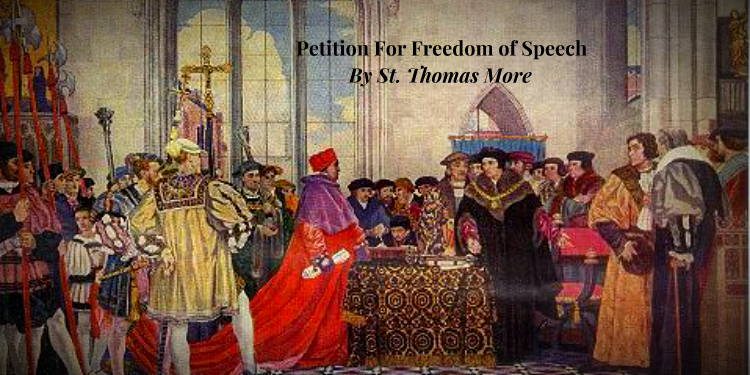 F or All Seasons

MADE AS SPEAKER OF THE HOUSE OF COMMONS TO KING HENRYVIII, 1523

In 1523, Thomas More was chosen to be Speaker of the House of Commons of Parliament. Hesitant to accept the post, he asked King Henry VIII to release him from the duty. The king refused his request and, accepting the position, More made a second request to King Henry: a request for free speech, the first such request known to be made. Like the Coronation Ode, this petition is a fascinating and important example of communication between More and Henry, and so is included in this volume of letters. The text is from William Roper’s Life of Sir Thomas More, modernized by Mary Gottschalk.

My other humble request, most excellent Prince, is this. Of your commoners here assembled by your high command for your Parliament, a great number have been, in accord with the customary procedure, appointed in the House of Commons to treat and advise on the common affairs among themselves, as a separate group. And, most dear liege Lord, in accord with your prudent advice communicated everywhere by your honorable commands, due diligence has been exercised in sending up to your Highness’s court of Parliament the most discreet persons out of every area who were deemed worthy of this office; hence, there can be no doubt that the assembly is a very substantial one, of very wise and politic persons. And yet, most victorious Prince, among so many wise men, not all will be equally wise, and of those who are equally wise, not all will be equally well-spoken. And often it happens that just as a lot of foolishness is uttered with ornate and polished speech, so, too, many coarse and rough-spoken men see deep indeed and give very substantial counsel. Also, in matters of great importance the mind is often so preoccupied with the subject matter that one thinks more about what to say than about how to say it, for which reason the wisest and best-spoken man in the country may now and then, when his mind is engrossed in the subject matter, say something in such a way that he will later wish he had said it differently, and yet he had no less good will when he spoke it than he has when he would so gladly change it. And therefore, most gracious Sovereign, considering that in your high court of Parliament nothing is discussed but weighty and important matters concerning your realm and your own royal estate, many of your discreet commoners will be hindered from giving their advice and counsel, to the great hindrance of the common affairs, unless every one of your commoners is utterly discharged of all doubt and fear as to how anything that he happens to say may happen to be taken by your Highness. And although your well known and proven kindness gives every man hope, yet such is the seriousness of the matter, such is the reverent dread that the timorous hearts of your natural-born subjects conceive toward your high Majesty, our most illustrious King and Sovereign, that they cannot be satisfied on this point unless you, in your gracious bounty, remove the misgivings of their timorous minds and animate and encourage and reassure them.

It may therefore please your most abundant Grace, our most benign and godly King, to give to all your commoners here assembled your most gracious permission and allowance for every man freely, without fear of your dreaded displeasure, to speak his conscience and boldly declare his advice concerning everything that comes up among us. Whatever any man may happen to say, may it please your noble Majesty, in your inestimable goodness, to take it all with no offense, interpreting every man’s words, however badly they may be phrased, to proceed nonetheless from a good zeal toward the profit of your realm and honor of your royal person, the prosperous condition and preservation of which, most excellent Sovereign, is the thing which we all, your most humble and loving subjects, according to that most binding duty of our heartfelt allegiance, most highly desire and pray for.

Part of Saints of Freedom

St. Thomas More was a literary scholar, eminent lawyer, gentleman, father of four children, and chancellor of England. An intensely spiritual man, he would not support the king’s divorce from Catherine of Aragon in order to marry Anne Boleyn. Nor would he acknowledge Henry as supreme head of the Church in England, breaking with Rome, and denying the pope as head.

More was committed to the Tower of London to await trial for treason: not swearing to the Act of Succession and the Oath of Supremacy. He was beheaded on Tower Hill, London, on July 6, 1535.

If You Enjoyed This Please Share it to   Social Media.